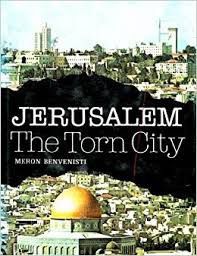 Today, in Jerusalem, two peoples are struggling over the City of Peace. For the first time in the 40 centuries of the citys history, this battle for Jerusalem is not being waged between a foreign invader and the local inhabitants but rather between two peoples who have lived in the city for thousands of years; two peoples who call Jerusalem "home." Meron Benvenisti, an historian and former Deputy Mayor of Jerusalem, describes the origins of this struggle, its development, and its effect upon the city and its inhabitants. In the first section of the volume, "Jerusalem Divided, " he provides the background to the situation at the time of writing, vividly depicting the years during which the city was divided by barbed wire and concrete walls. He portrays the efforts of Jordan and Israel, betw