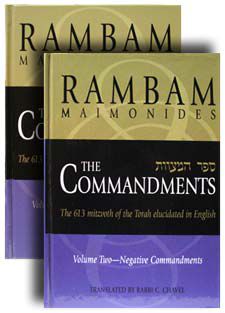 The commandments the 613 mitzvoth of the Torah Elucidated in English

Sefer Ha-Mitzvoth (The Book of Divine Commandments) in which Maimonides formulated all the Commandments pertaining to the Jewish religion, has been translated into English for the first time by Rabbi Dr. Charles B. Chavel. Rabbi Chavel has given us an excellent English version of this classic of Judaism. Besides the original text of Maimonides, Rabbi Chavel has made each and every Commandment the subject of a clearly stated resume. These resume's are the results of wide research, and quoting of many authorities... The work is invaluable to anyone making a comprehensive study of the Jewish religion, or of religion in general. Rabbi Chavelis is to be highly commended for his scholarly and dignified presentation.

The Sentinel One of the most important books on Judaism...

This two-volume set is the most authoritative English translation of Moses Maimonides' Sefer Ha-Mitzvoth (Book of the Commandments). In this, one of his major works, Maimonides explains the basic principles used in determining which precepts were to be included in the taryag (613) mitzvoth, then lists and comments on those commandments. Providing an encyclopedic knowledge of rabbinic literature, this work is a brilliant presentation of the most fundamental teachings of Judaism.

Judaism, as is well known, has been the mother-religion of the western world...But what is Judaism? What are its elementary and fundamental teachings? These questions have often been asked by laymen and scholars both Jewish and non-Jewish. Moses Maimonides, one of the most illustrious sons of Israel, gave a clear-cut, almost scientific, answer in his Sefer Ha-Mitzvoth (The Book of Divine Commandments). Rabbi Chavel has given us a lucid translation of this classic of Judaism. The late Rabbi Dr. Issac Herzog, former Chief Rabbi of Israel has appraised Rabbi Chavel's translation as a distinguished addition to Anglo-American Jewish literature.