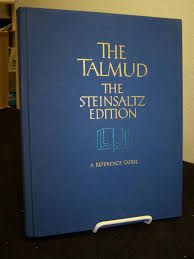 The talmud the Steinsaltz edition

The Talmud: The Steinsaltz Edition makes Judaism's great compendium of tradition, law, and legend readily accessible to the modern English reader for the first time. Accepted as the authoritative basis for all codifications of Jewish law and subsequent codifications of Jewish law and practice, the multivolume Babylonian Talmud has been studied constantly by Jewish communities throughout the world since its completion in the sixth century. Yet for most people, the complexity of the Talmud's Hebrew and Aramaic text is an almost impenetrable barrier to appreciating its riches. Even in translation, the unique system of logic and involved argumentation often baffle the inexperienced reader. The Talmud: The Steinsaltz Edition makes it possible for everyone to read the Talmud because it is more than just a translation. Rabbi Adin Steinsaltz becomes your personal instructor, guiding you through the intricate paths of Talmudic logic and thought. His extensive introductions and commentaries make the text crystal clear by providing all the background information needed to follow it, while his illustrated marginal notes supply fascinating insights into daily life in Talmudic times. This volume, Tractate Bava Metzia, Part One, is one of the first sections traditionally studied by newcomers to the Talmud, since it contains so many or' the basic elements common to all Talmudic logic. It focuses on the resolution of disputes that may arise in daily life and commercial transactions, such as rival claims to the ownership of property.